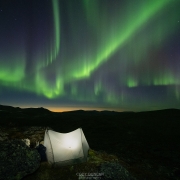 I spent the last days of August and the first week of September hiking sections of the Padjelantaleden and Kungsleden trails. The original plan had been for a full hike of the Padjelantaleden trail from Kvikkjokk to Ritsem, but as the transport to the trail stopped running on September 4th this year, Starting in the last days of August didn’t leave me with enough time to complete the full 140km, or about 8 days of hiking.

But as I had driven and parked at Kvikkjokk, I chose a somewhat hybrid approach to my hike this year. I flew in with the air taxi to Staloluokta, the approximate 1/2 way point of the Padjelantaleden, and then hiked the 60km north to Akka before crossing the lake to Ritsem the following morning.

Now, to get back to Kvikkjokk I could have spent a full day on buses. But having only hiked 60km thus far, a better option seemed to just hike back along the Kungsleden. So I caught the bus to Kebnats and the boat across the lake to a very busy Saltoluokta where I was lucky to get one of the last beds available. From there, I continued south for the 70km back to Kvikkjokk, including a small detour for a night camping on Skierfe.

Such a loop worked out pretty well and it was much easier just to arrive back at my van vs. figuring out some combination of buses and hitchhiking.

It was also nice to get a little more perspective of both trails at the same time of year. As expected, the Padjelantaleden was relatively quiet, with only a few people in the huts and most hikers hiking south towards Kvikkjokk. It seemed only a few people were hiking north, but this was probably also due to the closing of the lake ferry to Ritsem on Sept 4th, as it is possible to get a later pickup to Kvikkjokk.

Arriving on the Kungsleden at Saltoluokta, it felt like I had entered a big city, with large groups of hikers filling up every nook and cranny. I had intended to do a bit of laundry, but the entire drying room was completely full. Luckily I managed to get one of the last beds available and the last spot for dinner. Once further on the trail things quieted down a little, but it was still overall busier than the previous days on the Padjelantaleden.

The biggest difference between the two hikes is the quality of the trail itself. The Padjelantaleden is simply in far better condition, as mostly just a nice single track trail through the landscape. Even with significant amount of rain on the first couple days, the mud was still manageable in trail runners and there were only short sections of flooded bog to negotiate.

For the Kungsleden, the trail is warn and rocky and often spread out into multiple lines across the landscape. And I had really forgotten how tediously rocky the final day from Pårte to Kvikkjokk was. And it was the one section where I hoped it would remain dry, but of course it rained that night…

As previously, a night camping on Skierfe was a highlight of the trip. It was a clear, but cold and windy, night with hours of dancing northern lights overhead. My tent was well frozen by the time dawn arrived and it finally began to thaw in the morning sunlight. I was using a light Gossamer Gear ‘The Two’ tarp tent which uses trekking poles for setup, but still managed to find a decent place to pitch it – in the exact same spot I last camped there in 2015. This time I was aware to carry a little more water to the summit, though the small stream below was running much higher this year and would have been fine to collect water from – aside from the naked dude swimming and his friend filming Instagram videos in the small pond which feeds the stream. You might want to use a water filter!

Overall, it was nice to put in a few kilometers in Sweden again after several years of Covid where I wasn’t able to easily get across the border, even from northern Norway. I think the trails were probably busier this year as well, as many were also in the same situation as myself, so there was a bit of a backlog of hikers. It was nice to but into an old friend and make some new ones, and I was even recognised a few times on the trail…

The main goal for this year had been to get some more kilometers on the Padjelantaleden. My last hike in July 2019 had too good of weather and so I was never really happy with the photography in the eBook. I could see the potential of some areas, but it just wasn’t the right weather or time of year. And it was good to have a hiking partner this time, which is always better for hiking images, rather than me trying to take awkward selfies of myself.

The Padjelantaleden eBook will get an update sometime this winter or spring; before the next hiking season at least. If you already have a current copy or purchase one in the meantime, then you’ll receive a free update when the new edition is released.

I keep my schedule open from guiding here in Lofoten during the first half of September specifically so I have time to go hiking in Sweden. I’m not sure what next years plans might be, but many a return to the Ammarnäs to Hemavan section of the Kungsleden, or perhaps a bit of wandering around the Vindefjällen area. I guess I’ll just have to wait and see what the weather forecast decides.

Want to join the discussion?
Feel free to contribute!

This site uses cookies. By continuing to browse the site, you are agreeing to our use of cookies.

We may request cookies to be set on your device. We use cookies to let us know when you visit our websites, how you interact with us, to enrich your user experience, and to customize your relationship with our website.

Click on the different category headings to find out more. You can also change some of your preferences. Note that blocking some types of cookies may impact your experience on our websites and the services we are able to offer.

These cookies are strictly necessary to provide you with services available through our website and to use some of its features.

Because these cookies are strictly necessary to deliver the website, refusing them will have impact how our site functions. You always can block or delete cookies by changing your browser settings and force blocking all cookies on this website. But this will always prompt you to accept/refuse cookies when revisiting our site.

We fully respect if you want to refuse cookies but to avoid asking you again and again kindly allow us to store a cookie for that. You are free to opt out any time or opt in for other cookies to get a better experience. If you refuse cookies we will remove all set cookies in our domain.

We provide you with a list of stored cookies on your computer in our domain so you can check what we stored. Due to security reasons we are not able to show or modify cookies from other domains. You can check these in your browser security settings.

These cookies collect information that is used either in aggregate form to help us understand how our website is being used or how effective our marketing campaigns are, or to help us customize our website and application for you in order to enhance your experience.

If you do not want that we track your visit to our site you can disable tracking in your browser here:

We also use different external services like Google Webfonts, Google Maps, and external Video providers. Since these providers may collect personal data like your IP address we allow you to block them here. Please be aware that this might heavily reduce the functionality and appearance of our site. Changes will take effect once you reload the page.

The following cookies are also needed - You can choose if you want to allow them: